To transfer the donated heart, KTX(Korean Train Express) departure delayed by 3 minutes... Saved the life of a firefighter 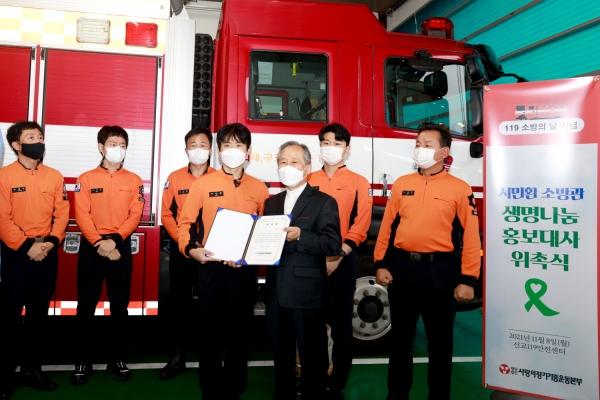 Firefighter Seo Min-hwan(fourth from the left), who received a letter of appointment as an honorary ambassador for organ donation from the bereaved family member of a brain death donation donor. ©Sarang Organ Donation Movement Headquarter

The headquater said "Earlier this year, an article titled 'The life of a young firefighter who had been waiting for a heart transplant was saved by a three-minute miracle made by medical staff, KORAIL(Korea Railroad Corporation), and train passengers' was reported."

They added, "While the heart donated by a brain dead patient was being moved from Daegu(southern province in Korea) to Seoul, the transporter almost missed the KTX(Korean Train Express) by a short margin. However with the request of medical staff, KORAIL and passengers, the train departure time was delayed 3 mintues and the heart plant surgery was operated safely. Through this, the person who miraculously received the heart plant was Seo Min-hwan, a firefighter at the Shingyo 119 Safety Center."

"With the noble love of the donor who donated the heart and the help of medical staff, KORAIL, and passengers, firefighter Seo, who started his second life after receiving a heart transplant on January 13th this year, returned to work in July after six months of sick leave," the headquarter said.

They continued, "As a Christian, Seo Min-hwan had been thinking about what he could do through God's ability and time, and then he became a firefighter in 2017 to help people. And it was in 2019 that Seo Min-hwan recognized that he had a health problem. While working as a fire extinguishing agent then, he found symptoms such as being easily short of breath during work and visited the hospital. The test results were shocking. Only 21% of the heart's function was left."

They said, "As time went by, his heart function got worse and worse, and he even faced a situation where he had to undergo a heart transplant." Eventually, at the end of 2020, he was admitted to the intensive care unit and began to fight against the illness with ECMO(ExtraCorporeal Membraine Oxygenation) on."

According to the headquarter, a miracle suddenly happened to Seo. A brain-dead organ donor donated a heart to him. In addition, fellow firefighters even collected 700 blood donation certificates for transplant surgery and donated to him.
Seo Min-hwan said, "In fact, after I was admitted to the intensive care unit and put on ECMO, I prepared for the last time," adding, "It was not easy to receive a heart transplant."

He continued "If the heart transfer were delayed even for a minute at that time, I wouldn't be here now. I am just grateful to everyone who has been willing to sacrifice and show courage to share their lives with me. "Remembering that love, I also want to be a man who can help save someone's life", he said.