One out of four Christian middle and high school students said, "I have thought about committing suicide." 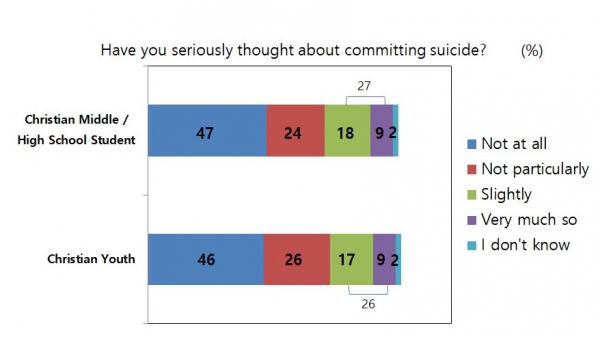 It was found that the suicidal impulse rate of Christian middle and high school students and young people was not much different from that of ordinary young people.

According to 'Weekly Lift No.113' released by 'Ministry Data Institute' on the 1st of October, the proportion of which "I have seriously considered of committing suicide" is 26%(Slightly+Very much so) on the survey conducted early this year targeted for christian youth and the proportion of the same inquiry on the survey conducted last April targeted for christian middle and high school students showed 27% respectively.

However, according to a survey by the 'Seoul Metropolitan Government', 27% of young people living in Seoul replied that they've thought of commiting suicide at least once during COVID-19 Pandemic. In the section with monthly income of less than 2.5 million KRW (about 2,000 USD), as many as 36% said they had thought of commiting suicide. This is the result of a survey for 2,011 people aged 19-34 living in Seoul as of October last year conducted by Seoul Youth Guarantee Center.

'Ministry Data Institute' also mentioned that "The Ministry of Health and Welfare has been tracking the 'National Mental Health Status' for the general public since COVID-19 breakout, and according to the results of the second quarter of this year (targeted for 2,063 adults aged 19 to 71), 12% of Korean people thought of suicide in the past two weeks, which is 2.4 times higher than 5% in 2019 before COVID-19."

'Ministry Data Institute' also claimed, "The suicide of a human having a life instinct means 'Rescue request' rather than having the death itself as a purpose. Among the people who attemp suicides, 30% said they were really trying to die, and 36% of them said that they were rather trying to get help instead of really putting themselves into death. It means that these people are desperate to send a signal so that their voices can be heard and they can be saved.

The Institute added "One's life can be joyful and much less tempted to committing suicide when we make a church of living together, neighbors of living together, and lastly society of living together. We hope that the church, by following the Lord's way who came into the world through incarnation, could become a life keeper and supporter in this world."