The North Korea Ministry Summit, a two-day conference hosted by Compassion International's Korea branch, began on June 8 with some 1,100 attendees.

Compassion Korea established a North Korea mission team in 2013 and has been preparing a ministry called 'After Reunification' with local churches to provide holistic care for impoverished children in North Korea. The ministry aims to raise up children with God's love, and build up responsible, mature Christian leaders. Unlike most other North Korea-related ministries, 'After Reunification' is preparing for the time that such care for children will be allowed.

The summit focused on the theme, '3 Firsts (First Frontier, First Generation, First Action),' and has three main sessions, eight breakout sessions, and a finale session. The conference took into consideration the fear of MERS that has been spreading in South Korea, and installed hand sanitizer in various locations throughout the conference location, and provided vitamin C to attendees. 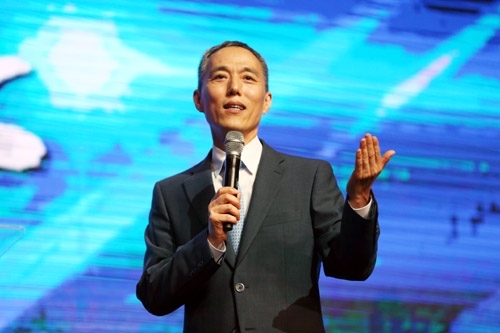 "While doing research about North Korean people for the past 21 years, I realized that they have encountered too many people who think too logically," he continued. "But they are touched by and open their hearts to those who sacrifice themselves to help those who are oppressed and impoverished."

"Some people think, 'If we could just take out the ideology that is taking hold of their minds, and put the gospel in their minds afterwards,' as a way of sharing the gospel to North Korean people, but actually, the reason that that won't work is that there won't be many who will be willing to listen when the gospel is only presented with words."

"When the Korean church sets out to serve the North Korean people, they have to be able to decide that they will not serve them from a 'higher' or 'loftier' position," Jeon continued. "Once religious groups, denominations, or churches start saying, 'We'll be the leading missionary group for North Korea,' the North Korean people will be sensitive to that and won't receive the message."

"Rather than waiting around and doing nothing until North Korea opens up, we need to prepare with the work that we can do right now," added Jeon. "If we neglect the poor and oppressed within South Korea while saying we are preparing to serve the North Korean people, wouldn't that seem a little off? It's difficult to love someone without getting hurt, and in the same way, it will be difficult to serve the North Korean people without preparation and training. There are countless places that are in need of help all over the world, and there are some 30,000 refugees who are in need of help within South Korea."

After Jeon's message, a violin performance by a young refugee followed. Thereafter, breakout sessions took place in four different locations, with speakers Seong Bin Im from Seoul Jangsin University; Do Hong Joo from Baek Suk University; Wess Stafford, the president emeritus of Compassion International; and Brian Fikkert, the author of 'When Helping Hurts: How to Alleviate Poverty without Hurting the Poor... and Yourself,' and professor at Covenant College.